Wrapped in the flag?

Everyone goes through changes during his or her lifetime. Sometimes there is an event that facilitates that change. I am no different. Until recent I would not have considered myself a "flag waver," and I still don't. Recently I have put up the Stars and Stripes on my house. My wife has graciously entertained my desire to fly a flag. So, what is the big deal about flying a flag? I mean we are Americans, right? Well, flying a U.S. flag today labels you to be some right-wing fascist, but I disagree.

As a child I always looked to the flag with reverence and awe. The flag represented a promise of freedom and equality. Also, the flag gave us an identity that instilled pride. Unfortunately, childhood ideals fall hard to adult realities, and the truth about the U.S. of A is at times less than savory and downright atrocious. But besides all of its faults my "country" has the potential to live up to those ideals I was taught as a child.

After 9/11 people across the nation became wrapped in the flag for many reasons. I resisted the urge to jump the band wagon, because the mentality behind this surge hinged on mass hysteria and hate. I call this type of mentality "Fox News Mentality." In the days that followed 9/11 anyone not agreeing with the Bush Administrations policies was labeled an America hating liberal. Many conservative pundits capitalized on this narrow definition patriotism by chanting the love it or leave it mantra and waving the "flag." Those citizens who embraced the conservative pundits views also intertwined the flag with Christianity practically replacing the cross as the religion's symbol. The beginning of the 21st century has seen the pendulum swing very far to the right twisting the consciousness of the United States and its views on patriotism. But no more shall I resist flying the flag!

After my friend Adam died fighting in Iraq I did some soul searching, and I found comfort in the stars and stripes. While his death was as senseless as the war itself, I saw Adam's sacrifice representing something bigger than ourselves, and I found myself urning for my country to finally embrace those ideals it has yet to achieve. I am reminded of the movie Saving Private Ryan, where Tom Hanks' character imparts instructions to Ryan, played by Matt Damon. At the end of the movie Hanks' character is gravely wounded and Damon bends down to hear Hanks speak the words "Earn this." Ryan was saved because of the sacrifice of fellow soldiers.

Now more than ever, citizens need to take charge once again, and earn the sacrifice of those who died. Our country has been led down the wrong path for the past several decades. Positive social institutions created during the progressive era of F.D.R., have been worn away bit by bit. Greedy corporations making consumption our new pastime control the government through well financed lobbyists and the so called "liberal media." Apathy exhibited by Americans towards the government is astounding. It is time for those who believe that the United States is "one nation indivisible with liberty and justice for all," stand and reclaim the flag.
Posted by Mike Jacoby at 5:28 PM No comments: 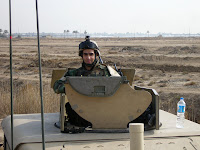 Two days ago my world shattered when I found out that my friend of 36 years was killed in Iraq. Adam and I have remained friends through good times and bad. Along the way we have had many adventures filled with humor.

For the past couple of days I have been reflecting on those memories while riding an emotional roller coaster trying to deal with the loss of a good friend. Everything that has been pissing me off about what is going on in the world now became more real than I could ever imagine. A cruel slap to the face leaving me powerless and numb. As I type now pictures of Adam litter my desk. I repeatedly read the press clippings on the Internet, and I am amazed how compact and concise the media has made this tragedy.

Adam was due to come home at the end of November. Initially, he was supposed to be out of the Army last August, but with the "stop loss" tactics in place he was sent back to Iraq for another 15 month deployment. My anger stems from this administration's blatant mishandling of our nations most precious resource, our armed forces. Adam, like his brothers and sisters in the military, gladly went to Iraq because of their dedication to this country. I admire that dedication and selfless service that our military provides to keep us safe. So, I must apologize for not doing more to protect those who protect us from the greedy individuals that used this war to further their twisted agendas and line their pockets with blood money. While Adam and his comrades have not failed us, we as citizens have failed them.

As I move forward I must keep vigilant not to let my memories of Adam fade. I will miss his generosity, loyalty, and strength. Adam's gregarious nature made him the lynch-pin in our circle of friends. Adam was excited to get home and meet up with everyone. I sure that even though his time in Iraq was hard Adam would have funny stories to tell leaving everyone on the floor in stitches. Comfort now lies in stories of our shared past.

Rest in Peace Adam. You are already missed. 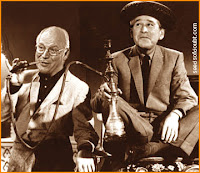 So much for my summer! George W. Bush has shown another facet of his administration to the U.S. and the world, unaccountability! Commuting "Scooter" Libby's sentence is perhaps the most blatant misuse of power seen yet from this circle of war-profiteering thugs. C'mon, 30 months in prison would be a walk in the park. How so, you ask? Because Libby would not have done his full sentence, and he probably would go to a minimum security prison.

In this corrupt administration of shredding, withholding, and deleting evidence there should be no surprise W stepped in to help a loyal underling. This is about CYA, y'all. An editorial in the NY Times said it best, "Presidents have the power to grant clemency and pardons. But in this case, Mr. Bush did not sound like a leader making tough decisions about justice. He sounded like a man worried about what a former loyalist might say when actually staring into a prison cell."

But some people will applaud this decision, and sadly enough believe this president is doing a good job. Oh well, I give up. I have put up with all the nonsense the neo-cons have dished out over the past seven years, but this just burns me to the core. If this kind of chicanery occurred anywhere else in the world people would flock to the streets in protest. Here in the U.S., however, I hear the deafening silence of acceptance. We have lost out revolutionary spirit. We have partaken of the Kool-Aid that the media-filter serves us daily, and we obediently consume to our hearts content. Sad situation indeed.
Posted by Mike Jacoby at 9:31 AM No comments:

Yesterday, after many years of papers and tests I finally received my Bachelor of Arts from Temple University.
My college journey began in 1989, and along the way life and its many adventures intersected with my academic career. I did not realize the importance of having a four year degree until I was laid off in 2002. I was working in information technology as a database administrator for a firm in Norristown, PA. While collecting unemployment and consulting, I found my job search hindered by the very fact that my resume lacked a degree. I was frustrated since my resume showed the culmination of over 10 years of experience in IT. So, in 2003 I decided to seriously pursue my education.

I had a handful of credits to my name, and since the last time I went to class was in 1995 they were still good. I believed I would pursue a degree in computer science, but after taking a history and a philosophy course that route seemed not so interesting anymore. I changed focus to history, and when I attended Temple I declared history my major and minored in philosophy.

Some would ask, "What are you going to do with a that degree?" Well, as the cliche goes, just about anything. Honestly getting my degree was not in vain, because I did learn a lot about myself and the world. My future plan is to attended Drexel University for a Masters in Library and Information Science. However, first I need to pay down some of my student loans, so I will be looking for work in IT again.

Posted by Mike Jacoby at 9:57 AM No comments:

Recently, I was doing my daily web reading and came across a link to the . I was very curious, so I clicked on the link. What I found was an interesting manifesto written by Marc Perkel. Perkel, calls himself the “First One,” because it was his idea. Fair enough. The church’s mission statement is “If it’s real—we believe in it,” but at the same time questioning what is real.

What is reality? That is a good question since reality is different for everyone, and defining reality has been the subject of philosophical debate for centuries. I think Perkel’s intentions are not necessarily in creating a religion per se, but questioning the religious landscape that exists currently in the . What is portrayed by the main-stream media to be the prominent religious viewpoint is disturbing. For the past couple of decades Christianity in had become synonymous with backward thinking. On subjects such as abortion, gay marriage, evolution, and stem cell research have brought out the worst in the Christian community, and have colored all Christians with one brush. I think Perkel’s site is a reaction to a very vocal minority group that has become so intertwined with the current President’s administration and Republican Party. Perkel makes a good point by stating we need to think and question, and religious people do just that. Not all religious people are mired in absolutism. Not all religious people reject reason and science.

So, why set up a religion? Why create a religion based on a structure that you do not like in the first place? What does an Atheist need with a religion to believe in to begin with? Perhaps it would be better to restructure the as a philosophical system. Personally that would make more sense rather than mimicking the very institution you do not agree with.

I don’t want to come off as bashing Perkel’s vision. I’m only raising questions, and I believe he would agree with questioning. Also, I agree with many of Perkel’s views on issues such as patriotism and the death penalty. The site is an online tome, and is worth visiting. The address is http://www.churchofreality.org

Rev. Jerry Falwell died of an apparent heart rhythm abnormality today. He was 73 years old. Falwell was the founder of the Christian Coalition and was a TV Evangelist, and his television ministry mobilized millions of votes to get Ronald Regan elected President.

Hopefully, this blog will be able to create an outlet for me to vent what's on my mind. Also, I would like this blog to be a place for you out there to respond and contribute you own thoughts.

Mike Jacoby
Posted by Mike Jacoby at 9:00 AM No comments: