O Brother, Where Art Thou?

What can I do? I am watching again as Israel goes on the offensive against Hamas. I want to understand why Israel believes that packing a people in to a small territory and cutting off aid and the basic necessities of life (water, electricity, the ability to move) would not incite rebellion? Have we forgotten our experience in the ghetto of Warsaw, Poland? Did we forget how the Jews fought with every inch of their life a losing battle but still fought bravely against the Nazis? Perhaps, this current situation is what Israeli leaders have been waiting for. A chance to finally remove any resistance or existence of the Palestinian population in Gaza. But why?
Okay, I know the history of the region, but doesn't our history teach us this is a losing battle? This continued aggression, despite the fact that rockets and suicide bombers constantly plague Israel, only elevates the Palestinian status to freedom fighters struggling against a colonial aggressor. Which is really the truth at this point, because if we changed the names for example Palestinian to Algerian and Israeli to French, we would understand the outcome. When one marginalized group is backed up against the wall their odds at liberation increases 100 fold. Doesn't Israel understand this? Israel lost the battle before it began. Even if Israel drives the population of Gaza into the sea, Israel will lose any security it ever wished to gain, because the Palestinian cause has become the rallying point for all Arab and Islamic fanatical hatred towards Israel. Of course not one of Palestine's neighbors cared about them before the creation of the State of Israel, but now that doesn't matter.
O, Israel! Look at what you have become! Has the struggle rendered your hearts incapable of mercy and compassion? Will the G-D of Abraham forsake the children of Ishmael and not deliver them when they cry out? What can I do? I still love you and stand by you. But I fear what the future holds for you.
Posted by Mike Jacoby at 10:36 AM No comments:

Born Again Biker and the Good Samaratin or What Does Riding a Harley Really Mean? 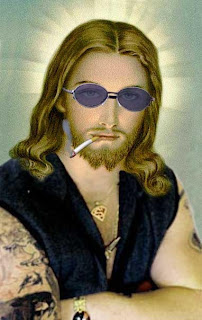 All I could do was swear and brace myself as the bike squarely hit the pothole. I thought only Philly had potholes capable of disabling your vehicle. But alas! I found one and hit it. At first I thought my front tire would blow and possibly bend the wheel itself. I got lucky, or so I thought, and rolled right into the gas station. It wasn't until I finished filling up that I realized the bike would not start.
See, I got this bike, a 05 Harley 883R, from a friend. Basically, he thought I was too domesticated and  gave his wife specific instructions that if he died in Iraq to give me the bike. We used to ride together, dirt bikes mostly, and hung out in my parent's garage doing mischievous things. The place became a local hangout with its cast of characters. We would sit around our bikes and tinker. Upset the neighbors with all the noise and other shenanigans. Twenty years had passed and now I'm rediscovering a passion that was dormant for too long.

My love for riding began when I was fifteen. I was working in a machine shop in Huntingdon Valley, my friend told the owner that I was 18, and I fell in with the older guys at the shop. They introduced me to the world of motorcycles. My first bike was a 1976 Kawasaki KZ 400 bought for $350. It was 1985 and that Summer I learned to ride. What I really learned was the camaraderie shared amongst other motorcyclists. The dropped left hand when you passed another motorcyclist signaled you were apart of something bigger. You stopped and help other motorcyclists when they were in trouble. So, standing there with my broken down bike at the Sunoco on Rte. 10 near Oxford, PA, I began to consider my options. In come two riders, one on a Harley FLHX, and another on a Honda Shadow. They came into the station from different directions, pulled up to different pumps and began filling their tanks. Both riders noticed me looking over my bike trying to get it started. I even tried to bump start the bike in the presence of both riders. The rider on the Harley bagger drives off not even considering helping me. Bye, thanks for nothing. The Honda rider pulls up next to me and says, "Having trouble?" Together, we systematically figure out that the ignition module came loose. Once the module was firmly seated the bike started. Afterwards, we talked about riding, I thanked Mike (What are the odds of having the same name?), and went our separate ways.

This incident really compromised my attitude towards Harley riders. Not the bike mind you just the people who ride them, and I know this does not apply to everyone, but I was riding a Harley at the time and was dissed by another Harley rider! WTF!!! Where's the brotherhood? Maybe, Harley dealers should hand out a little pamphlet, that I'm willing to write, instructing these noobs on how to be a real biker. Perhaps Harley's effort to sell more bikes has in effect brought the wrong element to the scene. Go into any Harley dealer and you'll find that most of there clothing (except the dealer t-shirts which are made in the U.S.) and some of the parts are made in China and elsewhere. Harley has perfected the illusion of the American biker and packaged it in a nice overpriced corporate bow. I mean really how much of a bad ass biker can you be wearing Harley jeans made in China? Guess I missed the real Harley motorcycle scene by 20 years. Oh, well. I'm still going to ride my Harley to honor my friend, but not buy into the hype.